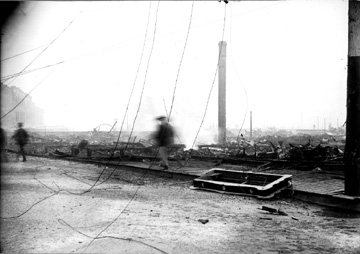 Now that the fall rains have begun the immense forest fires have slackened and, in most places, halted. As an object lesson in forest management, the 2000 forest fire year will provide debate points on all sides of the issue. Not to be forgotten, however, is that this year's fire is, in large part, a consequence of the Big Blow-up of 1910. The 1910 forest fire (actually over 1700 different fires scattered down the crest between Idaho and Montana) burned some three million acres and killed nearly ninety people. Wallace, Idaho, shown here, was one of the victims, losing most of the eastern part of town. This photograph, and others of the fire's spread through town as well as the aftermath, was probably taken by the Barnard Studio's Nellie Stockbridge.

Newspapers and oral histories document the brave and the cowardly; those who survived and those who didn't. Edward Pulaski (who later invented a combo fire-fighting tool) rescued his crew of forty by seeking shelter in a mine adit that he knew through prospecting in the region ten miles above Wallace. Mrs. Henry Henderling, with two small children, accompanied by the Dube family, walked from Burke, Idaho, to Thompson, Montana, staying one step ahead of the flames. Remote mining parties, such as Mr. and Mrs. E.H. Pattison on Sherlock Creek and Mr. and Mrs. George Cook on the St. Regis River, barely escaped the onrushing flames.

One result of the fire was the Forest Service's increased determination to fight fires. Congress agreed to support this expanded role. In addition, Wallace mine-owner and state senator Jerome Day and others urged Congress to open the forests to agricultural settlement by building more roads. This would insure, it was thought, "the presence, between the months of June and September, of a local-fire-fighting force, consisting of men who know the country, have a financial interest in the locality, and are skilled in the use of the axe and in methods of fighting a forest fire" (MG 5381). Like most such back-to-the-land, yeoman-farmer schemes this one would also have failed. In the process it would have decimated the forests and destroyed families who would have been unable to survive on the thin forest soil.

Wild fire is a force of nature, one that mere men can seldom hope to control. The hazard in attempting such control is, as always, the burden of unintended consequences.