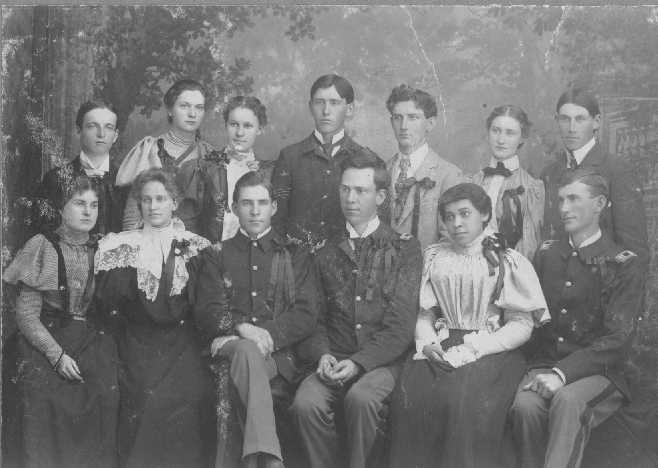 This photograph of the UI class of 1899 shows seven male students and six female students, including UI's first African American student Jennie Eva Hughes, seated in the first row, second from right. The nearly equal number of men and women students -- typical during UI's early years -- enhanced the perception that the West opened more doors for women seeking a college education. Statistics such as these leave a false impression, however.

"Charming and pleasant but useless," is how UI student Jeanette Orr described the prevailing attitude toward "lady students" at the University of Idaho in 1918. Gaining admission to a coeducational institution did not guarantee that a woman's experience there equaled that of her male colleagues. University of Idaho women faced greater restrictions on their behavior and on the types of courses offered to them. Women could not participate in intercollegiate sports, and they were directed to take courses thought to be suitable for a future wife: baking, cooking, and nutrition. Two female faculty served as role models for women students, but their professional lives, too, were restricted. Annette Bowman, Nellie G. Brown, Franklin B. Gault and John E. Ostrander were UI's first faculty members in 1892. The Board of Regents raised strenuous objections to "placing lady teachers in the same rank with the gentlemen," however. In response, President Gault stripped the two women instructors of their right to vote at faculty meetings.

Also among those who believed, as author Ivan Doig put it, that "westward we go free," were African Americans seeking respite from the rise of Jim Crow policies in the post-Reconstruction south. In 1891, Jennie Hughes' family heeded the call to relocate in a western state that -- many presumed -- lacked the racial prejudices of the eastern and southern states. We know little of Hughes' everyday experiences at UI, but she apparently thought enough of the institution to send her son Berthol to Moscow in 1919 -- thereby giving UI its second African American student.