Earl Larrison and the Scott Collection 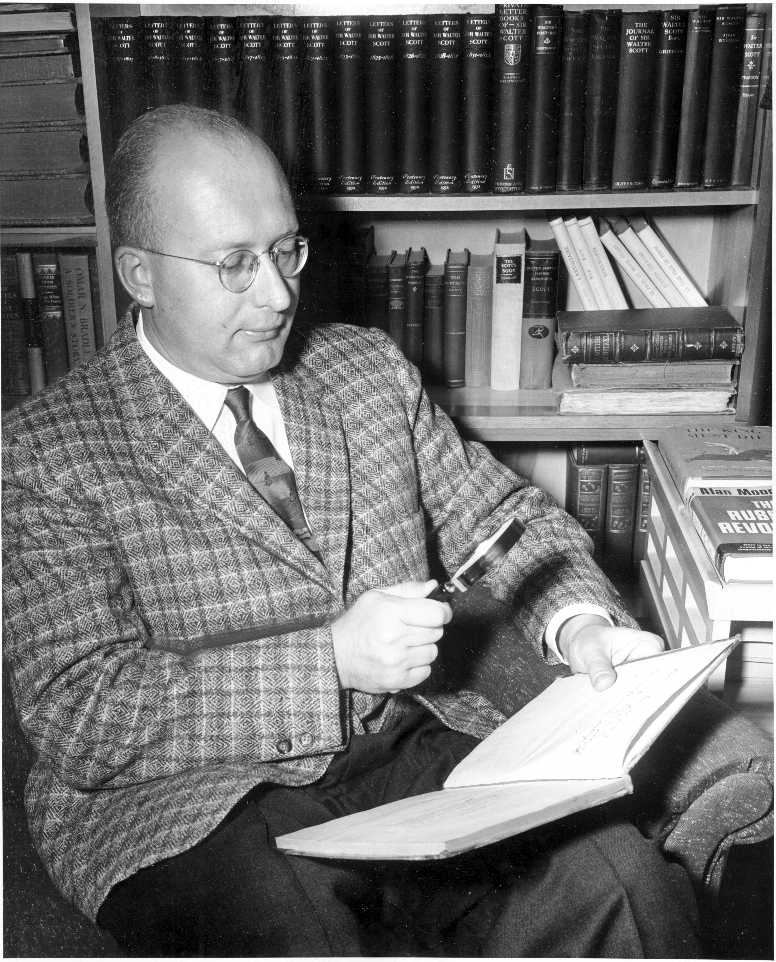 Biology professor Earl Larrison took his late-developing fascination with Sir Walter Scott and established an extensive collection of relevant books and materials. In his professional travels (as researcher, lecturer, conference-goer) he would haunt the rare and used-book stores, seeking out first editions of Scott's works. He also acquired a substantial number of books about Scott and his era. Equally significant was his effort to acquire more than just the first edition; he was also interested in the subsequent changes in presentation and format as well as provenance and ownership. In 1978 he remarked: "I was not solely interested in obtaining first editions or beautiful bindings, though I did get many of the former and a number of the latter. Rather, I tried to acquire as many of Scott's published works as possible, as well as critical reviews and biographies of Scott by other writers."

Beginning in the early 1960s, Larrison began donating his collection to the university library; by the time of his death at age 68 in 1987 the collection had grown to over 1200 volumes related to Scott's work and life. Among these is the first edition of The Antiquary (1816), often called Scott's favorite novel. In addition to its rich characterization of country life, The Antiquary includes an excellent description of how many such special collections are built and valued:

Here were editions esteemed as being the first, and there stood those scarcely less regarded as being the last and best; here was a book valued because it had the author's final improvements, and there was another which (strange to tell!) was in request because it had them not. One was precious because it was a folio, another because it was duodecimal; some because they were tall, some because they were short; the merit of this lay in the title-page, of that in the arrangement of the letters in the word "Finis." There was, it seemed, no peculiar distinction, however trifling or minute, which might not give value to a volume, providing the indispensable quality of scarcity or rare occurrence was attached to it. --Sir Walter Scott, The Antiquary. 1816. I:61-62.

Scott's own antiquarian impulses are elaborated in his historical romances and epic poems, as in Ivanhoe (1820) and Lady of the Lake (1810), and in his recording of early ballads and folktales. But the obvious question today is whether Scott anticipated that his own books would be subject to such collecting.