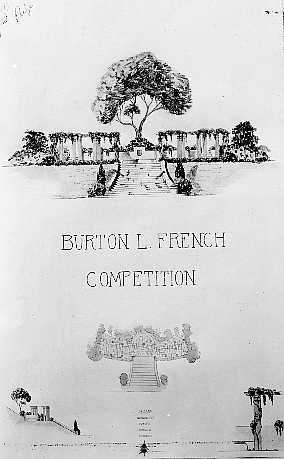 At the 40th anniversary convocation in October 1932, Congressman Burton French, class of '04, proposed that the University create a memorial to the early days of the University by restoring the stone steps from the original Administration Building. When that building burned in 1906, the site was cleared for the new Administration Building, and all the burnt masonry, stone, and concrete was buried or hauled away. French recognized that portions of the original stonework were still extant, and suggested that they be used as a basis for the memorial.

To further this appeal, he donated $25 as prizes for a student competition. The winner of the $15 first prize was Jedd Jones of Malad whose winning design is pictured above. The installation differed from the design. Jones continued his architectural career after graduation and eventually became a partner in the successor firm to Tourtelotte and Hummel, of Boise, who had designed the new Administration Building in 1907.

Although many of the stones from the steps were still on campus, others had been removed over the course of years. French scouted out one block that was hidden in the weeds near the railroad track at the bottom of Lynn Street. The story has been told that one of the stones was recovered from Florida. This seems to be a misreading of the correspondence which indicates that a property owner who wintered in Florida gave the University permission to remove the stone from her garden on Polk Street in Moscow.

Some years later, President Harrison C. Dale decided that the steps, installed behind the new Administration Building, needed to go somewhere, so a marker and a bench were added at the top. Later still a path across the hill to the new fraternity row was installed, making the steps useful again.

As they settled into the hillside over time, the steps became unsafe for pedestrians. This year, the steps are being refurbished and reset. Thus, they will continue to be a memorial to the University's first Administration Building and its heritage.