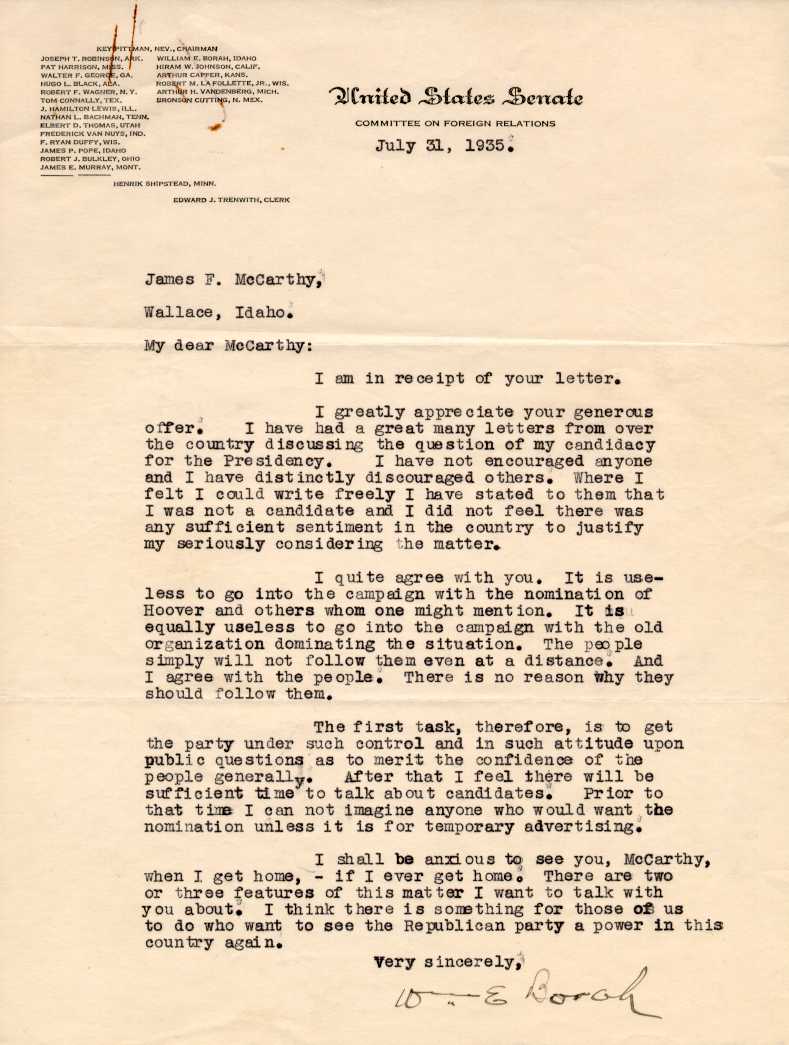 In the summer of 1935, William E. Borah was nearing the end of his career as Idaho's U.S. Senator. First elected as a Republican in 1907, Idaho voters continued to favor him; they re-elected him five times. Noted for his isolationist stance on the Committee on Foreign Relations, Borah also kept the home folks happy by supporting the mining and agricultural interests in the state.

In this letter, the seventy-year-old Borah, after denying any interest in the Presidency, strikes a recurring, reformist, note: "It is...useless to go into the campaign with the old [Republican] organization dominating the situation. The people simply will not follow them even at a distance. And I agree with the people. There is no reason why they should follow them." Ultimately, he determined to oppose the old guard (many younger than himself) and to make a run for the Republican presidential nomination in 1936. Although defeated at the national convention, losing to Alf Landon who went on to lose to FDR, Borah reaffirmed his power as one of the few Republicans in a New Deal-dominated Senate.

Borah's correspondent, James F. McCarthy, was a prominent Wallace mining executive, president and general manager of Hecla Mining. Both he and Borah died in early 1940.

This letter is but one of twenty or so items to and from Borah by McCarthy and others that were brought together by the library or by some collector. Some are substantive letters of politics and policy, others are more perfunctory. In its small way, however, it provides a glimpse of Borah's influence and relationships. Additional materials on Senator Borah include the ten linear feet of Borah scrapbooks and papers, 1903-1947, that make up Manuscript Group 10.