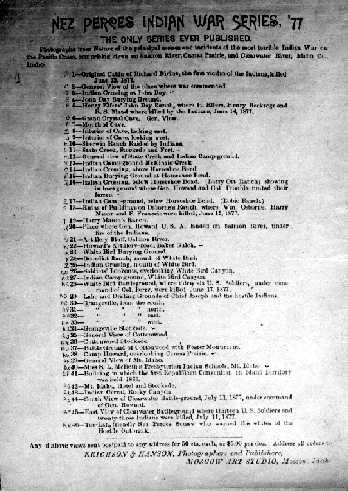 In October of 1891, the Grangeville, Idaho Free Press carried an advertisement for "Nez Perce War Photographs of '77." Drawing on the well-remembered events of only fourteen years previous, the Moscow Art Studio, in Moscow, Idaho, a joint venture by photographers Erichson and Hanson, promised to illustrate "all the Historical places on Salmon river, White Bird, Clearwater, and the beautiful Camas Prairie. The land of Indian romance and tragedy. The most Picturesque Region in Idaho. The most elaborate Photographic History ever published on the Pacific coast."

The series was ambitious, although perhaps not "the most elaborate...ever published on the Pacific coast." Forty-six images comprised the entire series, which sold for 50 cents each or $5.00 per dozen. The title of the series, however, is misleading, these are 1891 photographs of scenes of the Nez Perce war, not photographs taken in 1877 . Central Idaho's major sites -- cabins, caves, bluffs, stockades, river crossings, battle sites, and towns -- were all documented. Not surprisingly, their captions support the settlers' point of view about the war. The tragedy of the Nez Perce removal, the impact of the political struggle on the different bands, the flight across Idaho and Montana with the aged, the women, and the children, is not represented. Even as late as 1885, in the face of widespread public appreciation for the Nez Perce situation, Chief Joseph and his band were unwelcome in their homeland.

Henry Erichson was born in Germany in 1856 and arrived in the United States only fifteen years later. He learned the photographic art in Michigan and practiced in Red Bluff, California. After nine years as an itinerant photographer he established himself in Moscow, Idaho, from 1884. He continued in business there until at least 1908, serving on the city council and as president of the Photographers Association of the Northwest.

John A. Hanson was two years older, born in Denmark, and nineteen when he came to the states. Moving westward from New York, Hanson traveled to Illinois, and then to California by December 1874. After several years as a summer-time itinerant photographer, he moved to Moscow in 1890 and then on to Grangeville in the following year. There he continued as a photographer, with "The Elite" printed on his mounts, until at least 1910. A successful businessman and property owner in Grangeville, Hanson was an IOOF member and, as well, a member of the Red Men.

Erichson and Hanson had met in California and were briefly partners as Hanson and Erichson. When Hanson joined Erichson in Moscow they resumed their partnership (as Erichson and Hanson) and it continued for a year or so after Hanson moved to Grangeville. Thus it was undoubtedly Hanson who took the photographs making up this series. Erichson was to supply the marketing and distribution muscle while Hanson established his studio in Grangeville. Neither of the two were in Idaho during 1877, so their relationship with the depicted events was entirely second-hand.

As a group the photographic images entitled "Nez Perces Indian War Series '77" have proved quite ephemeral. The Historical Museum at St. Gertrude, just outside Cottonwood, has at least two images from the 46 image group, one on the original mount. The Idaho State Historical Society in Boise has what may be a copy of one scene. The University of Idaho Library does not have any of the original photographs but holds early photocopies of eight of the images, plus a copy of the back of the mount listing all forty-six images in the group. Information about the location of additional images would be welcomed.

[Editorial note: While obvious typos have been corrected, the insensitive language used at the time was retained.]

The Only Series Ever Published

Photographs from Nature of the principal scenes and incidents of the most terrible Indian War on the Pacific Coast, comprising views on Salmon River, Camas Prairie, and Clearwater River, Idaho Co., Idaho.

Any of above views sent postpaid to any address for 5 cts. each, or $5.00 per doz. Address all orders to