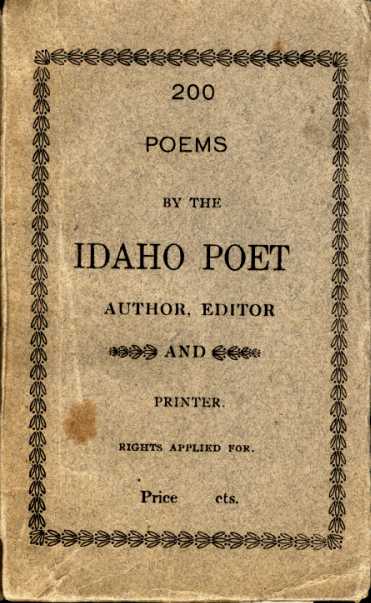 Just before Irene Welch Grissom was appointed Poet Laureate of Idaho by the Governor in 1923 another appeared claiming the more definitive title. In 1921 or soon thereafter, the Idaho Poet published his 200 Poems. This small booklet with its 156 unnumbered pages printed partly on letter stock and partly on newsprint contains poems dated between 1886 and 1921. They reflect the author's life as a laborer, a miner, a bindlestiff, and a Wobbly sympathizer. He writes at times of the hated capitalist bankers who robbed him of his stake and whose gun thugs massacred women and children at Ludlow, Colorado. At other times he writes lyrically in measured couplets of his travels throughout the scenic West.

It is possible to extract some biographical data from his poems, necessary because the author is otherwise unidentified, referring to himself as the Idaho Poet even within the poems. There might be cases where he identifies himself as Bill or Willy, but these are not certain. He came west from Illinois in 1866 to search for gold. He lived for thirty years in Boise (which he consistently refers to as "Boisie") perhaps with a family. Thirty-three years later he returned after living in Spokane for some time. He may have had a flexible sense of the passing of time. He trapped, hunted, cooked, and guided. He labored in the mines at Kellogg and on the wheat fields of the Palouse and Big Bend Country. He swung down through Oregon, California, and Arizona and back up to the Northwest through Utah. He was a travelin' man, certainly a migrant laborer. He claimed that he became a poet in 1905 standing on Spokane's Monroe Street Bridge. He often traded poems for rides and perhaps food; he was supported by his muse.

The longest poem in the booklet, where most are one page or less, is the twenty-four page "A trip to Boisie 8 12 21" which captures his trip by train, auto, boat, and foot from Spokane to Boise. He names towns and places: Spangle, Colfax, Pullman "Where aspiring youths from all the state / Comes here to learn and be up to date," Lewiston, Culdesac, "Thru tunnel and hillside we slowly wound," R[e]ubens, Grangeville, Whitebird, Ox Bow, Riggins, New Meadows, Weiser, and "Boisie." From there on to Nampa, Durkee, Gold Hill, Baker, Powder, Grand Round [Ronde?], Union, LaGrand[e], Pendleton, Weston, Walla Walla, and Dayton. As he carries his "thots" back in time it is sometimes difficult to tell whether he is recounting his current journey or one from his past. At one point, he notes:

In rhyme I'am writing, this trip so you will know
But my pose as a Poet reaches beyond Idaho;
And for your heaven or hell, have little care
If the place that I chose, my bones will rest there.

Like many of the published poets of his generation, what the Idaho Poet lacked in technical sophistication, he made up for by grounding his work in his very real experiences. Signing up with a labor contractor, in " I Bought a Job," he describes the work on a threshing crew:

The chaff and sweat daubed my clothes
The skin [peeled off] my hands and nose
With dirt and chaff, they got so sore
As hourly those water blisters tore.

As "Author, Editor, and Printer" the Idaho Poet's booklet provides evidence of his journeyman skills in all three areas. If he did find work as an itinerant printer, no evidence of that can be found in the poems. It is in the poems that we find his love for the Idaho landscape which once fostered the radical laboring classes.