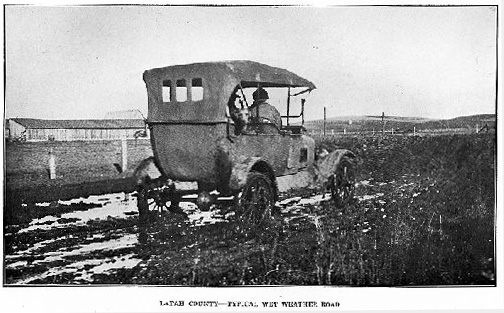 In the larger scheme of things the Lewiston Hill was always a greater obstacle to land travel than the short 23.4 miles from the top of the grade to Moscow, Idaho. As automobile use increased, the main route was fixed with the completion of C.C. Van Arsdol's spiral highway in 1917. In 1919, this stretch through northern Idaho was designated the North and South Highway. It was graveled and "surfaced," i.e., graded, by 1924 and paved by the end of 1933, thus ending much of each spring's traffic-stopping mud. This improved road was then incorporated into the federal numbering system as US 95 in 1926. Straightening the route began in the 1950s when a new highway bypassed the town of Genesee to the west. Passing lanes were added as well, first on Reisenauer Hill in Latah County, and then an additional section in Nez Perce County in the late 1990s.

Replacing the Spiral Highway and planning for a regional airport in 1972 generated a corridor study of the link between the top of Lewiston Hill to Moscow. Two corridors were considered, the existing highway which passes near Genesee, and a new Stateline Corridor that hugged the Idaho-Washington border, crossed the existing US 95 near Sand Road and passed just west of the main part of campus. The upgrade from two lanes to four lanes was not estimated to be needed until after 2010, accordingly it was not further pursued at that time.

It is probably not this section of US 95 that was referred to as a "Goat Trail," first by Governor Cecil Andrus in 1970, and repeated every decade by others; but to the many university students from south of the Salmon River who made the long trek two or three times a year, it must have seemed something like the "last" mile.