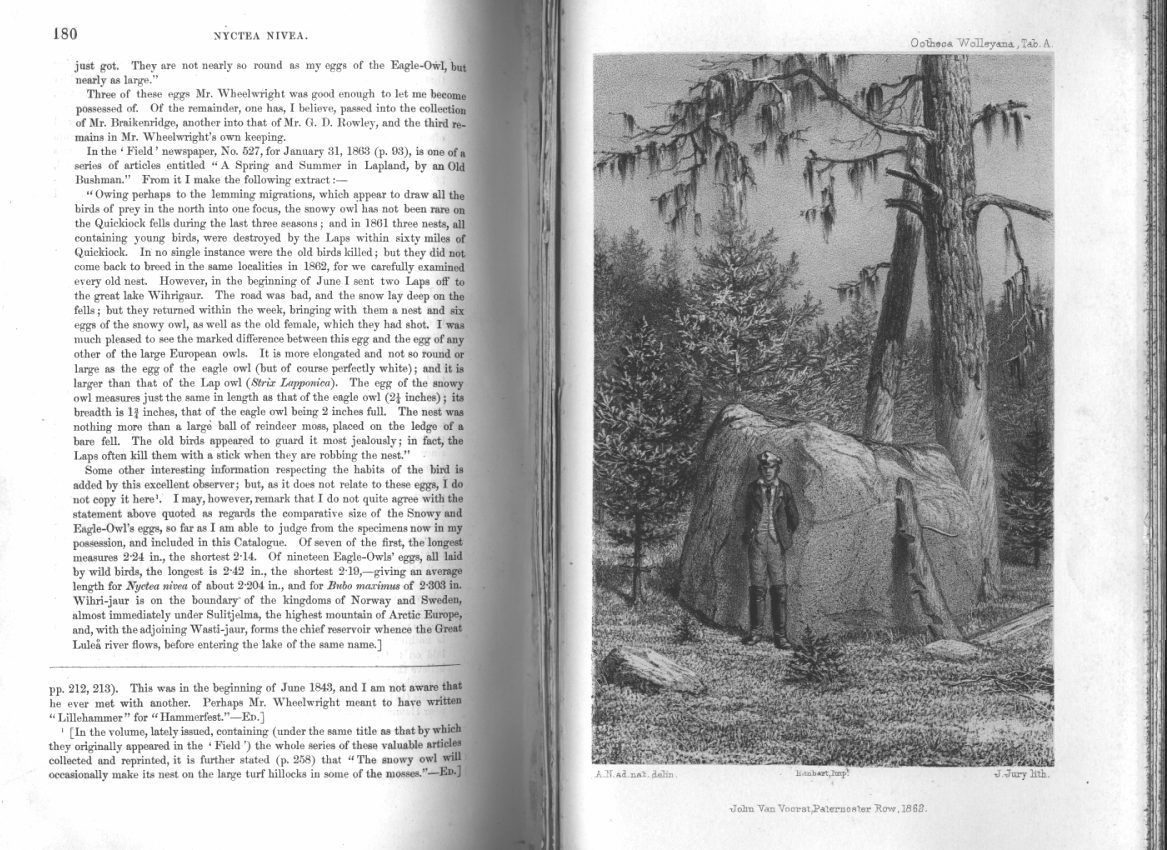 Last week, the collection development librarian for Biology asked me to look at a recently discovered mutilated book. Was it possible, she asked, to transfer it to the protection of Special Collections before more of its illustrated plates were razored out?

The book was Ootheca Wolleyana: an illustrated catalogue of the collection of birds' eggs, begun by the late John Wolley, jun. ... and continued with additions, by the editor, Alfred Newton published in four volumes. One would not think that a catalog of bird's eggs would be attractive to a plate thief. But the plates in these volumes were extraordinary. Judging from those listed, most of those excised were the chromolithographed colored plates of eggs (22 have been removed) Of the remainder, some of the plates were illustrations of bird habitats (or, in other words, landscapes); some were black and white or color lithographs of birds; and at least one of those remaining was an original watercolor of an egg. There is also a frontispiece portrait of John Wolley and a colored map of Lapland. Artists represented were J. Balcomb, Grönvold, M. Hanhart, J. Jury, and J. Wolf.

John Wolley's biography is given in a memoir by Alfred Newton in volume one. Wolley was born in Derbyshire in 1823, went on to Cambridge in 1842 where he continued his already great love for natural history. His first articles were published while still a student in 1845. In 1846, after graduation, he began to study law in London but withdrew to continue his historical research on birds. Tiring of law, he took up medicine, graduating from Edinburgh in 1851. During vacations, as before, he continued to seek bird nests and collect eggs. He moved to London to continue his occupation and his avocation. Newton, who accompanied him in part, gives considerable details of Wolley's adventurous egg collecting expeditions, particularly in Lapland, during this time. It is implied, but not stated, that he supported himself by selling eggs to collectors. During 1858 he remained close to home as a consequence of illness to which he succumbed in November 1859, aged 36. Newton was the recipient of Wolley's collection and notes and resolved to prepare "a complete Catalogue of the contents of his Egg-Cabinet" for publication.

Alfred Newton, who thus continued his friend's work, was six years younger. Also a graduate of Cambridge, he joined the faculty there as the first Professor of Zoology in 1866. He was recognized as an expert on birds and wrote on them for the Encyclopedia Britannica, as well as in other books and articles. He died in Cambridge in June 1907 soon after completing Ootheca Wolleyana.

Wolley and Newton exemplified the transition taking place in the natural sciences at the middle of the nineteenth century. Wolley was the eager amateur whose enthusiastic collecting activities paved the way for Newton's more academic analysis and categorization.

The publication of Ootheca Wolleyana took nearly forty years, a fact which Newton apologized for. The first part was published in 1864; it was not until 1902 that Newton was able to resume the work and the next parts appeared in 1902, 1905 and 1907. Volume one consists of Newton's introduction; a memoir of the author; and pt. I Accipitres. The latter has a separate title page and the 1864 date. The second volume, or part II, covers Picariae-Passeres, and was issued in 1902 The third volume has two title pages: "Volume II, dated "MCMV-MVMVII" or 1905-1907, and one labeled Part III, dated 1905. It covers Columbae-Alcae. The fourth volume is part IV. It includes Alcae-Anseres; a supplement with corrections, omissions and additions; and an appendix listing the publications on natural history of John Wolley, except those included in the body of the work. It is dated 1907. The original paper covers have been bound in.

According to one source, there are only four copies of this work west of the Mississippi, at Arizona State, Kansas State, the University of Texas, and (in part) at the University of Idaho. A recent catalog listed it for sale at several hundred dollars, far more than the $22.50 the library paid for this work over forty years ago. Accordingly, even reduced in information, we have placed it in Special Collections for safekeeping.

The damage done to these volumes by removing the plates could be considered one example of what Garrett Hardin called the "Tragedy of the Commons." Placing them on the open shelves where all could freely browse through them subjected them to the hazard of the selfish few. Their actions have diminished the research and intellectual value of the collection by depriving all of us access to the now missing plates. It would be impossible for the library to identify, and move to closed stacks, all those volumes, many now over a hundred years old, that could be subject to the razor's blade. All illustrated magazines, for example, are at risk, as can be evidenced by the tattered remains still on the shelf. Diminished by this kind of cultural terrorism, we have little recourse that does not subject us all to hardship and dismay.