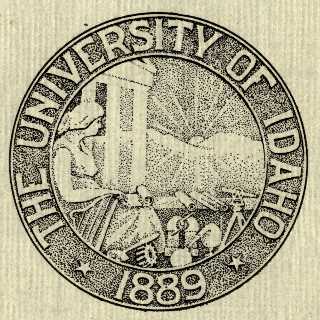 There are, it turns out, several University of Idaho seals. The first to be documented was unanimously adopted by the Board of Regents on April 9, 1908: "In the matter of adopting a design for a new seal for the University, Mr. Vaughn appeared before the board and presented a design and explained the same for a new seal for the University." The new design was printed on the front page of the Argonaut on April 28, 1908. It was also used on the front cover of the Catalogs for 1907-08 and 1908-09 and reappeared there in 1932 and 1933.

The design was circular, with a border reading "The University of Idaho 1889." Inside the border a woman is seated before a colonnaded building watching the sun rise over the mountains in the distance. Beside her is a harp, in front, on her lap and on a ledge, are rolled up scrolls. In the foreground are a sledge, a gear, some chemical apparatus, and a surveyor's transit.

In none of these appearances was the symbolism of the seal given, although clearly Vaughn "explained" it to the regents. In April 1908, Arthur Peirce Vaughn was an Instructor in History in the University's Preparatory School. The following year he became an Instructor in Sociology in the regular university curriculum. By 1910 he had left the University. According to his brief vitae in the Bulletin, Vaughn received his BS from Lenox College in 1893, then studied at the Princeton Theological Seminary before graduating from the Omaha Theological Seminary. He spent the winter of 1901-02 in Italy and Greece studying art and history before returning to the States to finish his MA at Lenox in 1904. The following year he was off to Japan to teach History and English at Meiji Gakuin, Tokyo, and the Imperial Government Normal School in Sapporo. On his return in 1907, he accepted the appointment at the University of Idaho. Apparently during the summer of 1908, before shifting to Sociology, he took additional graduate work at the University of Wisconsin.

After leaving the UofI, Vaughn may have returned to graduate school. A published poet and author, Vaughn produced a small 27 page book, entitled "In the Days of His Passion," dated 1914. A single, autographed copy has been located in the catalog of the Harris Collection of American Poetry at Brown University, Providence, Rhode Island. He also, when writing a poem about Idaho, published in Sunset (October 1910), repeated the widespread, but now refuted, story of Idaho as "Gem of the Mountains." Later in 1910 an account based on his experiences in Japan appeared in the November Review of Reviews. In February 1915, Overland published his article entitled "The Charmed Pen of Stevenson."

Rafe Gibbs, in Beacon for Mountain and Plain (1962), describes the seal, illustrated on the frontispiece of his book, as "the Lady of Knowledge, seated before a pillared edifice as she looks at the promise of an Idaho sunrise" (p. 308). He states that Vaughn was secretary to President MacLean (a statement not otherwise supported by the documents) and supposes that this seal replaced an earlier and simpler seal. A simple text-only seal was used to emboss official notices and diplomas prior to 1908.

After adoption by the Regents, Bursar Francis Jenkins wrote to Tiffany & Co. in New York asking for an estimate for engraving a two-inch seal of the new design. Tiffany's response, found in the President's Office files in the University Archives, quoted a price of $95.00 for a seal mounted in a hand press (October 15, 1908). Thinking that might be too high, Jenkins wrote to the Irwin-Hodson Company of Portland, Oregon and received a quote of $20 for the first, and $15 for the second (December 12, 1908). Jenkins forwarded the letter to MacLean asking "What shall we do with this?" and MacLean wrote "OK" and initialed it. Jenkins then wrote ordering the seal: "Please give us as much definition and as careful workmanship as possible on the various symbols in the foreground of the design around the figure as these being so small will necessarily be rather difficult" (February 1909?). This metal form was engraved specifically to emboss official papers, including diplomas, with the University seal.

Gibbs' real story is of the supplemental seal initially sketched on restaurant napkin by President Buchanan in 1946, and revised by Ted Prichard and Alf Dunn. Buchanan's major contribution to the design - a map of Idaho superimposed by a shield and symbols of Idaho's major industries: grain, tree, pick and shovel, and a beacon torch of knowledge - was the expression "Teaching - Research - Service." Gibb states that other universities across the country quickly adopted this phrase as a slogan capturing the land-grant mission (p. 309). This new supplemental seal was first published in University of Idaho Reports, February 1947.

The Lady of Knowledge seal was not discarded. In fact, in the mid-1960's it was redrawn and revamped. The lines were made cleaner and brighter. In addition, the objects in the foreground were more stylized, the sledge and one of the alembics disappeared, and books replaced the scrolls. Also, the lady was now looking down towards the book in her lap, reading, no doubt, instead of looking off to the sunrise over the mountain. The text was also shortened; it read simply "University of Idaho 1889." This new design appeared on the covers of the 1967 and 1969 catalogs.

The following year the UI "daisy" was introduced in the catalog and became a dominant part of the University's graphic identity. But the "Lady" continued her presence inside the catalog through to the present day. A different, harsher, line drawing appeared in 1972 and was used until 1993. In the following year a darker, more black and white version of the original Lady, her eyes firmly set on the horizon and a scroll on her lap, appeared and has been consistently used since.