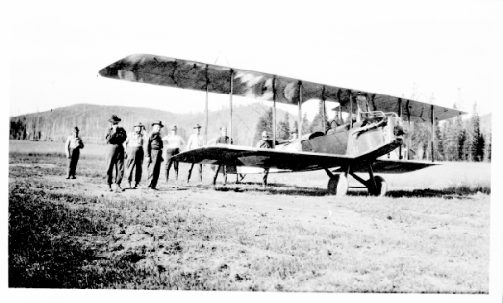 In 1923, the Potlatch Timber Protection Agency (PTPA) tested the usefulness of aerial patrols to supplement their existing system of fire watchers posted on mountain top tree stumps. The Forest Service had successfully initiated an aerial forest fire patrol program in southern California in 1919. Spokane pilot Nick Mamer was offered $600 to fly fire reconnaissance over northern Idaho's forests. With fellow pilot Clyde Pangborn as mechanic, Mamer landed the massive Standard biplane at Hog Meadow, near Bovill. Observing the experiment was the Potlatch Lumber Company's Clair Nogle, the State Land Department's Ben Bush, and PTPA Fire Warden Ray Woesner. The war-surplus Standard's two seats would hold three or four, the pilot and one or two observers. One of the observers took several photographs on the ground and at least one from the air.

Fire Warden Woesner summarized the unsuccessful experiment in the PTPA annual report for 1923:

We had intended to supplement our lookout system with aeroplane patrol this year, and after negotiating for a considerable time with Captain N.B. Mamer of Spokane, an agreement was finally reached this spring whereby Captain Mamer was to do the flying for us with his own planes, we to furnish the observers and landing fields.

Captain Mamer experienced difficulty in getting the kind of planes he wanted for this work and finally landed at Bovill a month later than the time agreed on to start patrolling. The plane he had was not adapted to this kind of flying, and, after making three or four flights, he left for parts unknown.

As a result of Captain Mamer's failure to fulfill his contract, I am not in a position to comment on the practicability or efficiency of Aeroplane patrol.

The end of the war in 1919 left the army with thousands of unneeded aircraft and unleashed upon the country many young men who had learned to fly and intended to continue doing it. A significant percentage turned to barnstorming, flying a plane from village to village, doing often dangerous stunts to attract crowds and then offering short flights to the adventurous in the audience. Clyde Pangborn and Nick Mamer were pioneer barnstormers.

Pangborn grew up in northern Idaho, learned to fly in the army, and then bought a plane to fly from farmer's field to farmer's field. To promote the business, and pay for the wrecked and damaged planes, his stunts got bigger and more dangerous. In San Diego he was nearly killed in a car to plane transfer over the beach. He wingwalked, he flew upside down, he rescued a woman parachutist dangling 15 feet beneath a plane. And, more prosaically, he flew forest surveys. Later, in 1931 he and Hugh Herndon concluded their round-the world flight by flying non-stop from Japan to Boise, turning back at the last minute because of fog to land in Wenatchee.

Nick Mamer's barnstoming career was nearly as extensive as Pangborn's and included stunts at the Idaho State Fair in Boise in 1920. A car-plane race ended in a crash when he failed to clear the overhead trolley lines at the end of the field. He established Mamer Flying Service in Spokane and in 1929 he and a co-pilot did a five-day non-stop round-trip transcontinental flight involving aerial refueling. He was also the pilot hired by Washington State College students in an unsuccessful attempt to firebomb the University of Idaho's rally bonfire pile in 1925; he was dissuaded by birdshot from the County Sheriff. Pangborn had been involved in a more successful effort by USC students against Stanford's bonfire before the 1920 big game.

Timber owners, spearheaded by the Potlatch Lumber Company's William Deary and A.W. Laird, established the Potlatch Timber Protection Agency (PTPA) in 1906 as a cooperative effort to fund fire-fighting activities. In 1965 it merged with the Clearwater Timber Protective Association (CTPA) to form the Clearwater-Potlatch Timber Protective Association with A.B. Curtis as Secretary and Chief Fire Warden. Curtis embraced air patrols for the CTPA and once hired Mamer to fly the governor and other dignitaries across the region. This 1930 trip in a Ford tri-motor included A.W. Laird, Governor Baldridge, and Ben Bush, by then State Forester. The high spot of the tour was the landing at the Weippe cemetery where there was a level open path between the tombstones leading to a small creek which Mamer jumped, landing safely.

Clyde Pangborn's personal and professional papers are held at Washington State University Library, see the inventory at <http://www.wsulibs.wsu.edu/holland/masc/finders/cg112.htm>. Phoographs and papers relating to Spokane's Mamer-Shreck Air Transport Service are at the Northwest Museum of Arts and Culture.