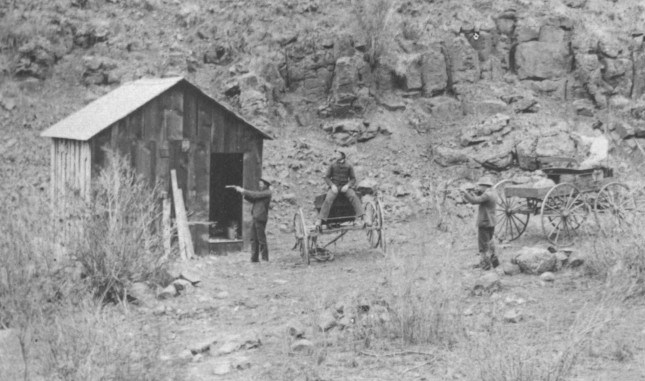 A century ago, in the days before corporate entertainment found its mass market and spread from the cities to rural areas, people made their own fun. They took walks, went to the park or to the river, played cards, put on home-grown entertainments, had picnics, and visited their friends and neighbors. Their entertainment was active and purposeful; in the Pacific Northwest it was often outdoors.

Evidence of these activities is scattered in diaries, letters, and photograph albums. This example, a photograph of a group of friends playing cops and robbers (or posse and rustlers) is from a small -- 6" x 8" -- black scrapbook which has been identified as the Eaton family photograph album. Many of the images, of a group of friends and family in the area around Lewiston, Idaho, and Asotin, Washington, have paper captions that humorously comment on the photos. For instance a photo of a young man between two women is captioned: "Which shall it be?" This image is ironically labeled "A lonely cabin."

In the context of the other photographs in the album, it is clear that this is not a photograph of an assault on a miner in his cabin nor the arrest of some desperado. Internal evidence also suggests that this is a staged picture of friends having fun. One man is holding a pistol with two hands while another points a rifle; it is not clear whether they are aiming into the cabin or to the left of it. The woman on the right may be aiming a gun or waving an umbrella, but she is looking more towards the camera. The third man is watching but not participating. Interestingly, while there are two buggies or wagons, no horses are in evidence. The rocky outcroppings and sparse vegetation place this activity in the same neighborhood as those that are specifically identified.

Outdoor recreation has become a big business in the West as participants seek out the monumental scenery, the free-flowing rivers, and the unchecked forests. Guides and outfitters are also finding that this audience is equally interested in the heritage component. The old West (real and imagined) lives on as a touristic enterprise.