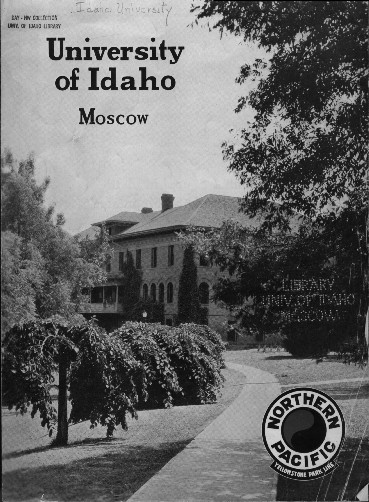 In the spring of 1928 the Northern Pacific Railway Company, as part of its publication of brochures and pamphlets encouraging travel to the Pacific Northwest, prepared a slim page-sized illustrated piece inviting the reader to consider attending summer school at the University of Idaho. One piece of paper folded to make six pages, the leaflet is illustrated with six photographs of the campus, one of Lake Pend d'Oreille "A Beauty Spot in Northern Idaho," and a giant white pine growing near Moscow.

Pines and prairies meet at Moscow, Idaho, making this spot of varied scenery a delightful place for summer work at the University of Idaho.

In addition, the "summer weather is cool and pleasant," the "University City is charmingly situated," and Moscow "holds a strong appeal for those who wish to get away from crowded centers and from the depressing summer heat of low inland regions."

There were two railroads into Moscow, the Northern Pacific and the Oregon, Washington Railway and Navigation Company (a Union Pacific subsidiary). The two depots were across the tracks from each other between Sixth and Eighth Streets. Later they built one depot a bit north, a Union Station for both railways. This small brick building with each railroad's symbol centered on the paired gabled ends was demolished in 1965 after passenger service was discontinued.

On the back page, as the brochure expands on the scenic wonders of the Pacific Northwest, the text makes a surprising reference to State College when the University of Idaho is clearly meant. This suggests that a portion of the text had previously been used for a very similar brochure prepared to publicize the summer session at the nearby State College of Washington (now Washington State University). Copy and paste clearly predates computer production.