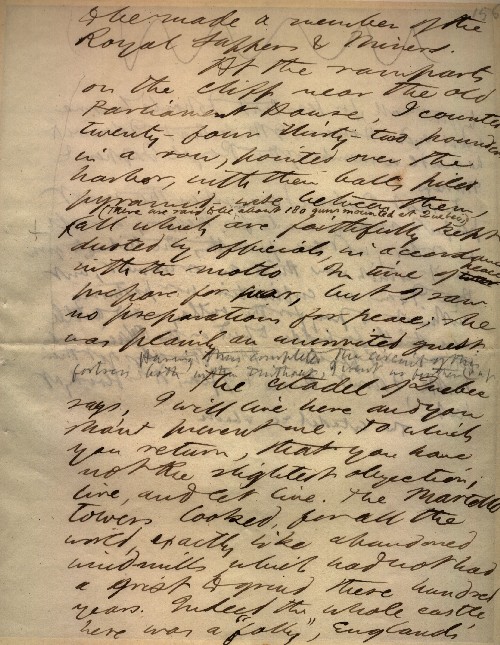 The impulse to collect has been with us always. Books are an excellent example, particularly when we can see the result: the many great library collections resulting from the efforts of dedicated collectors. For those with the means and the inclination, collecting books was a way to demonstrate one's wealth and sophistication. At the turn of the century -- a hundred years ago, one way to do that was to acquire limited editions of well-respected authors. An edition could be limited by a fine binding, or a limited printed run, or, perhaps, by the inclusion of some token of the author's such as a leaf from a manuscript.

The example here, from The Writings of Thoreau, is all of these. It is from a twenty volume set, bound in leather with marbled paper inserts, it is a limited edition of 600 copies, illustrated with full plate engravings from scenic photographs, and, to cap it all off, since it is the "Manuscript Edition," volume one holds one leaf from a Thoreauvian manuscript, as shown.

This set, with the bookplate of University Regent Jerome J. Day -- for whom the Day-Northwest Collection in the University of Idaho Library is named -- is number 496 of the 600 and contains one inset leaf (numbered, in pencil, 156) from A Yankee in Canada. Henry David Thoreau, born July 12, 1817 in Concord, Massachusetts, the son of a pencil manufacturer, lived and wrote the transcendental life. His journal, the record of his life, became the source for his books and essays on living on the outside of a materialistic society. A Harvard graduate, a friend of Emerson, an essayist, and a naturalist; these twenty volumes of "Writings" pull into print much of Thoreau's that had not previously been collected together in this form.

The story of Thoreau's manuscripts is the topic of a nearly exhaustive bibliography by William L. Howarth published in 1974. After Thoreau's death in 1862, his sister Sophia became his literary executor. She supervised four posthumous publications and by 1874, just before her death, had determined on a successor, Harrison Blake. Blake's efforts in arranging and relabeling the manuscripts caused later scholars much misapprehension. Blake published four volumes of Thoreau's Journals between 1881 and 1892. His successor, Elias Russell, began to turn the manuscripts into cash, selling the bulk of them to New York dealer G.S. Hellman who split them into three blocks and disposed of them. Howarth writes:

The third block of Hellman manuscripts went, as previously arranged, to Houghton Mifflin in 1906 for their "Manuscript Edition. " The company prepared six hundred sets of this twenty-volume edition, each set with a single manuscript leaf (or half-leaf) tipped into volume I. . Locating and identifying these fugitive leaves remains, even sixty-five years later, a frustrating and seemingly endless task. . At least one reviewer of the Manuscript Edition charged the publishers with "vandalism" for breaking up Thoreau's manuscripts, but to the editors this seemed a "legitimate" means of disposal, especially for fragments of text long since published.

Russell finally disposed of the remainder to Hellman in 1907 who found a buyer in a New York collector who later disposed of his group to J. Pierpont Morgan, routing them back through dealer George Hellman.

Over the years, many of these larger groups ended up in public collections, such as the New York Public Library, the Huntington, Brown University, and the Universities of Texas and Virginia. Howarth makes a valiant effort to identify and collate all the manuscripts in their respective repositories, tracking materials in forty-seven repositories. It is not surprising that he missed the one leaf at the University of Idaho Library.

In 1991 former Spokanite and Thoreau scholar Bradley P. Dean compiled a list of the 1906 Manuscript Edition Sets. This was published in the Thoreau Research Newsletter with an updated copy placed on the Web at <http://www.bradleypdean.com/Publications/Checklist_Ms_Ed_Sets.htm>. Dean's update lists 165 of the 600 numbered copies published, but 28 of those are missing the first volume or the manuscript leaf has been removed. This checklist includes the leaf in the University of Idaho's Writings of Thoreau.

The manuscript text includes a small portion of Thoreau's account of his ten-day excursion to Montreal and Quebec in 1850. In it he describes the fortifications at Quebec's citadel. Thoreau's extensive description of the ramparts and watchtowers, barracks and walls, allows him to note the folly of such efforts. The cannons, he notes, "were faithfully kept dusted by officials, in accordance with the motto, 'In time of peace prepare for war;' but I saw no preparations for peace: she was plainly an uninvited guest."

Although a single leaf of manuscript, this fragment has some usefulness to scholars. Although the text has been available in print since 1866, an examination of the manuscript reveals that the editor (primarily Thoreau's sister Sophia) clearly made an effort to "improve" it. Paragraphs and sentences were moved about and some words were changed. It is only by viewing the manuscript itself that one can get a closer sense of what it was that Thoreau intended. This is the essential purpose of primary sources, to preserve and make available the original documents and publications. Unfortunately, to read the page before this one and after this one, dispersed as they are, would require a search for the rest of the manuscript, scattered in other volumes and other collections.

Addendum 2/16/06: In fairness to the diligent research of William L. Howarth, please note that the University of Idaho Library's manuscript edition # 496 of The Writings of Henry David Thoreau wasn't cataloged in-house until June 1970, just a few years before publication of his work The Literary Manuscripts of Henry David Thoreau in 1974.