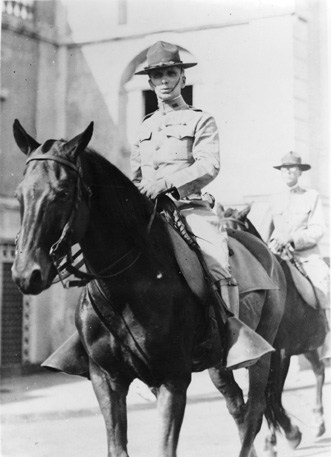 In April 1936, the University of Idaho campus celebrated an unusual event when President Neale cancelled classes. The occasion: President Franklin D. Roosevelt had just designated, at Congress' behest, General Edward R. Chrisman as Commandant of Cadets and Lecturer in Military Science and Tactics Emeritus for the "remainder of his life." Senator Pope reported that "As far as I can determine, this is the first time Congress has so honored a regular army officer."

Forty-two years earlier Lt. Chrisman had arrived in Moscow to organize the Military Science Department and, saving the fledgling institution the cost of another faculty member, to teach mathematics. West Point graduate Chrisman, born in 1866, threw himself into his new role. In addition to his teaching responsibilities, he served on faculty committees and, at one time, on the university's football team.

Following his commission as a 2nd Lieutenant, Chrisman was assigned to the frontier army's 4th Infantry in South Dakota. In December 1890, the 7th Cavalry erupted against a Sioux village of men, women, and children, known today as the Wounded Knee Massacre. As an infantryman, Chrisman did not appear to have a role in the attack, serving, according to one source, as brigade signal officer commanding a mounted detachment carrying messages from the troops to the general. His own description placed this service among "Engagements & skirmishes." He was subsequently assigned to the Army's Submarine Mining School in New York. About this time he married a West Point classmate's sister, Florence Ryan; they later had two children.

It was while at Fort Omaha that Chrisman saw the notice of the position at the nascent University of Idaho. Both Chrismans believed there was not much chance of winning the position. A chance meeting while buying wine in the commissary had the Colonel urging him to apply. Going back to his quarters the Lieutenant and his wife determined that a coin flip would make the decision. His application was successful and they took the train to Idaho. As UI Professor of History Cornelius J. Brosnan told the story, approaching Moscow "they saw the frame of blue mountains, the undulating hills, and the tall 181-foot tower of the old Ad Building. Mrs. Chrisman said, 'Ed, I think I'm going to like Moscow.'"

His support and empathy for the students became legendary. In one account he is reprimanded for joining his cadets in a local saloon after drill. His response was that he went "where he was most valuable -- also, that he was not ashamed to be coming out of a saloon and that he would always enter and leave by the front entrance." The latter comment was undoubtedly a reference to other members of the faculty. However, unlike them, his salary and appointment came from the army, not the university.

Chrisman's military students were divided into two companies: Company "A" and Company "B." After watching the two male units drilling and marching, a group of women students asked to participate. Chrisman established a Company "C" and included them in the military program. A visiting army inspector, surprised to see Company "C" among the cadet corps, in uniforms of their own design, congratulated Lt. Chrisman, saying that the women performed so well, he was awarding all the Idaho cadets an excellent rating.

As Chrisman's four-year assignment was drawing to a close, the battleship Maine exploded and war was declared against Spain. On April 16, 1898, as a later newspaper account reported, "the morning of Lieutenant Chrisman's departure for the war, a body of personal friends and townspeople who had been honoring him with a party the night before, gathered on the corner...and stopped all the students on their way to classes. There were no dormitories, and everyone lived in town, so the entire student body was detained, some willingly, others against their wishes. The faculty recognized the futility of trying to hold classes, and a holiday was declared following an assembly in Chrisman's honor." Annually, for several years thereafter, the returning veterans disrupted and barricaded the campus in what was at first called "Chrisman Day."

It was undoubtedly Lt. Chrisman's leadership that prompted thirty-nine of his cadets to enlist when war was declared. Out of a total student body of barely 250, this was the largest percentage from any one college or university. Two of the Idaho students did not return. A memorial statue commemorating their service is located on the Administration Building lawn.

Chrisman was first sent to Cuba, where he participated in the attack on San Juan Hill made famous by Teddy Roosevelt's volunteer Rough Riders. Chrisman's later brief notes, saved by Professor Brosnan, include: "First meeting with Teddy in field here and there. On morning of July 1, 1898 on trail to front. Column to come through us, gave right of way to save organization. Under artillery fire. Shells exploding. Through jungle. 'Rough Riders' had right of way. [Col. Leonard] Wood, T. R., [journalist] Richard Harding Davis. They went by us: 6th Infantry Regiment of 500. Leading columns. Wild western officers. Rough Riders wanted to do it all. Ahead, off to the right, Kettle Hill. 1 mile off side to right. Caught center of battle. My captain was killed."

Although cited for gallantry in action during this campaign, Chrisman was apparently denied his silver star until June 1934. In part, the citation reads: "[for] action in the Battle of San Juan Hill near Santiago, Cuba, ...leading the company in the advance and in the final charge, being among the first officers and men to reach the hill to take possession of it." While Roosevelt's public relations efforts ensured that he alone got the credit for this attack, the regular army contingent was under-reported in the popular press.

The capture of Santiago was not the end of the war with Spain. Across the Pacific, Dewey's defeat of the Spanish fleet at Manila raised policy questions at the highest level: was America going to liberate the Philippines or re-colonize it? What became called the Philippine Insurrection against the American military brought Chrisman, soon to be promoted to Captain, to Luzon where he reported "various skirmishes with remnant bands of [President] Aguinaldo's army in the Cagayan River Valley" and other places.

In 1902 Captain Chrisman returned to Moscow to resume his previous post as Professor of Military Science. However, in 1906 he was assigned to return to the Philippines where the insurgency had expanded on the island of Leyte. Chrisman characterized this as "several skirmishes with Pulahans (religious fanatics) culminating in the battle of Binahan in the mountains which ended armed resistance -- covered 1900 miles marching and scouting." A fragment of a reminiscent note indicates he may have been wounded, by a Philippine bolo -- a "big knife" -- during this campaign.

Captain Chrisman returned to teaching in 1909 when he was placed in charge of the military science program at South Dakota State College (now University). In March 1911 he was promoted to major. The same year he was assigned to Fort Gibbon, Alaska, then to the National Guard of New Jersey, and, in 1915, to Panama's Canal Zone. Here he received a promotion to Colonel and then, in 1918, to Brigadier General. At the conclusion of World War I he was commanding 20,000 men in Puerto Rico. While there he became reacquainted with former U.S. Representative, Moscow businessman, and one of the founders of the University, Willis Sweet. Sweet had arrived in San Juan with a patronage appointment, then became a newspaper owner. In March 1919, when wartime ranks were discontinued, Chrisman's active duty rank was Colonel, and it was as a Colonel that he returned to the University of Idaho to stay. He noted; "1919, to Idaho!"

In 1921 he retired from active duty, having served for 37 years. He was immediately recalled to duty as a retiree to continue with Idaho's military science program. He was 55 years old and had decided to make Moscow his home for good. The retirement and recall sequence pulled him out of the army's normal duty rotation and made it possible for the Chrismans to settle down.

In 1930, his rank was increased to Brigadier General once again when Congress returned all officers to their wartime rank. Of course, having a Brigadier General in charge of a university military department was a great honor to Idaho. In 1932 the General once more took retirement, but continued to serve as Commandant of Cadets without pay.

Two years later, a group of alumni established the General E. R. Chrisman Recognition Committee with Earl David (of David's Department Store), J. E. Buchanan (Assistant Professor of Civil Engineering and later University President), and Roland Hodgins (of Hodgins Drug) as the Executive Committee. The committee raised funds for a large oil painting of the general which was later displayed in the Chrisman Room in the ROTC department. The Committee's correspondence file shows receipts of many $1.00 contributions; one among many similar notes reads: "Would like to make this more but the depression forbids."

The same year, U.S. Senator James Pinckney Pope introduced a bill in Congress recognizing General Chrisman's achievements; specifically that he "had served in the army for 50 years, during which 24 1/2 years were spent as military instructor in colleges, 22 years at the University of Idaho. It is believed that no other officer of the Army has ever equaled this length of service on college duty, or approached it by many years." The Argonaut reported that the campus erupted much as it did for the first Chrisman Day in 1898; in celebration President Neale declared a campus holiday.

On January 15, 1939 General Chrisman died; he was 73. In his will, published on the front page of the Argonaut, he requested that his ashes be scattered over the campus by airplane. The next year, Chrisman Hall (now Phinney) was named in his honor; the name was transferred to the two top floors in Theophilus Tower in 1969.