Way Out in Idaho 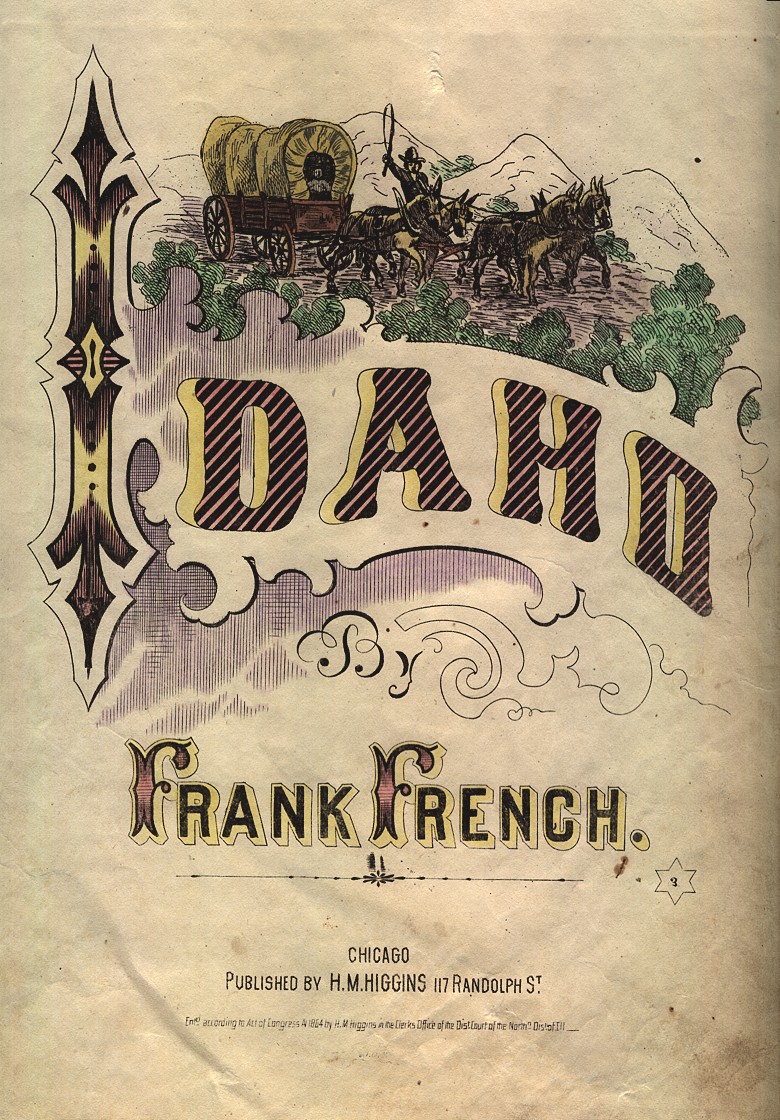 In 1864, when this sheet music was printed in Chicago, Idaho was the back of the beyond. Gold strikes in the mountains drew thousands to places that now barely see hundreds. There were no cities, but the towns - Pierce, Warren, Oro Fino, Silver City, Idaho City, Florence - all hoped to be as big and bustling as Lewiston, barely more than a tent city itself. That gold was the attraction is emphasized in the words "We're bound to seek our fortune there, Way out in Idaho."

Idaho folk-singer Rosalie Sorrels, in her centennial song-book, Way Out in Idaho (1991) named after a different song with this refrain, notes that she first heard this Idaho song in New York State. Then she heard it sung in Challis as part of an oral tradition that may have been recorded in a notebook in the late 1800s. A UofI student collected a version of this song from his 85-year-old Boise grandmother in 1964. Many "folk" songs derive from non-folk sources, and vice versa.

In all likelihood, neither the unidentified cover artist nor the author had ever visited Idaho. Frank French is not a widely published composer, but the publisher H.M. Higgins had a prominent place in Chicago's early musical history. With his brother Adoniram Judson Higgins, Hiram Murray Higgins opened a music store in 1855 where they published a variety of popular ballads and dance tunes. The partnership fell apart in 1859 and Hiram moved a block or so down Randolph Street and continued to print sheet music. Getting out of the publishing business in 1867, Hiram concentrated his efforts selling horns, strings, and pianos until 1869 when musicologists lost interest in him.

There are four other copies of this song sheet in existence, one at the Denver Public Library's Western History Collection (the name Idaho is of Colorado derivation), one at the Library of Congress, one at Yale's Beinecke Library, and another at Duke University Library's Special Collections Department. The acquisition of this sheet music by the University of Idaho Library demonstrates the circular round of music, a mid-western song about Idaho becomes part of a western tradition, while the 140-year old song sheet eventually makes its home in an Idaho library.

They say, there is a land,
Where crystal waters flow
O'er beds of quarts [sic] and purest gold
Way out in Idaho.

We'll need no pick or spade,
No shovel, pan, or hoe,
The largest chunks are 'top of ground
Way out in Idaho.

We'll see hard times no more,
And want w'ell [sic] never know,
When once we've filled our sacks with gold,
Way out in Idaho.